A successful pilot program at Broadview Elementary has just wrapped up. What’s next for Garry oaks in the classroom?

Students use rubber stamps and colored pencils to depict their version of the habitat found inside Garry oak ecosystems. Each student was provided their own Garry oak folders which they took home to keep at the end of the program.

The students were taught that Garry oaks are our native tree. Through hands-on examples they were shown key parts of Garry oaks, such as leaves, roots, acorns, branches and bark. The students learned defining characteristics of Garry oaks, and where they grow in Oak Harbor. They were taught the lifecycle of the Garry oak tree from acorns to seedlings to saplings to mature trees and played games to enhance learning.

Through several books and weekly story time the students were taught the importance of Garry oak ecosystems and the ecosystem components. Pictures of ecosystems components, such as animals and plants, were cut into flash cards and magnetically displayed on the whiteboard for students to view and manipulate for learning. Students examined a habitat hole in a Garry Oak limb and discuss why habitat is important. They were taught the history of Garry Oaks in the original landscape of Oak Harbor and some of the major reasons why they’re disappearing. 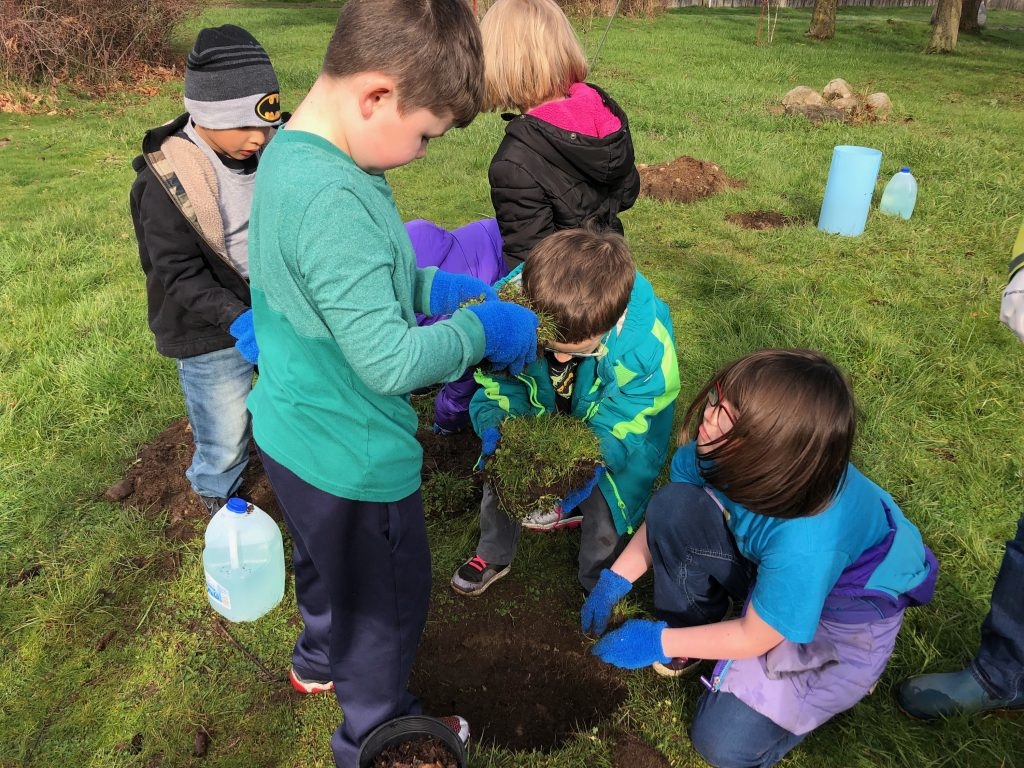 The need to replant was emphasized with the students, and, at the culmination of the class, students participated in planting three locally grown Gary oak tree seedlings on the Broadview Elementary campus. These new trees join three small Garry oaks that were planted by the school several years back.

In April, Laura will be meeting with the librarians from Oak Harbor Public Schools to discuss our upcoming donation of Garry oak books for school libraries. This will be made possible with a generous grant from Island Thrift. We can’t wait to share with you the titles in a future newsletter! With the district’s literature curriculum up for review soon, we hope to have the Garry oak incorporated into the curriculum so that all students in Oak Harbor receive education on their city’s namesake tree.

About the Author: Laura Renninger

Laura is a native of Whidbey Island and grew up with a reverence for the Garry Oaks in Oak Harbor. In addition to being a founding member of OHGOS, Laura is a Registered Nurse and has worked in acute care for the last 30 years. Laura and her husband, Barry, are avid gardeners.